Over excited dog? Regular physical exercise is both healthy and necessary for our dogs. There are however some common problems that can, and often do, affect our dogs when they are incorrectly exercised. 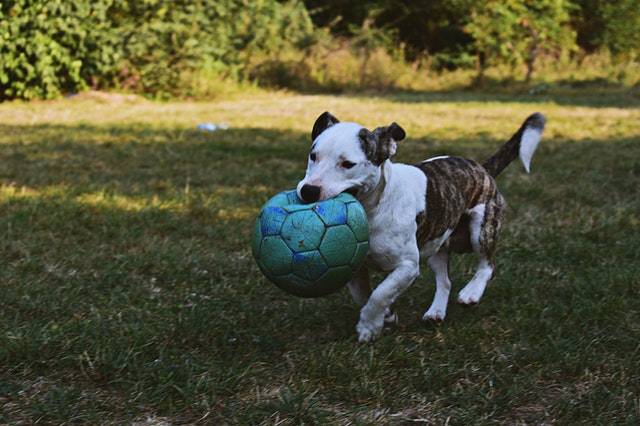 One of the biggest faults is allowing our dogs to become over-aroused while being exercised. This coupled to the misconception that over-excited dogs need to be exercised harder and longer to tire them out, often leads to the emergence of unwanted behaviours.

So what is over-arousal (or over excited dog) and how do we recognise it.

Arousal is our dog’s level of excitement and emotional control. When a dog is highly aroused he will have very poor impulse control and his heart rate will often be elevated. He may vocalise incessantly and jump around or onto you, including mouthing or grabbing at leads, toys or other items you may be carrying. Panting, pacing and spinning in circles can also be associated with over-arousal.

Dogs that are highly aroused are often stressed, however, stress is not always a bad thing. When we talk of stress we always do so with a negative connotation but there is also a positive form of stress called eustress. Winning a prized trophy and having your car stolen are both stressful events to which the body reacts in exactly the same manner although your emotional response is vastly different.

This is pertinent to our dogs too and is important to remember because happy and exciting events can create a physiological stress response in our dogs. When your dog is stressed the body releases stress hormones into the bloodstream and these hormones can take up to, and sometimes even longer, than 72 hours to dissipate. Imagine how you would feel if you went sky-diving followed by a rock concert every single day. Our bodies and likewise our dog’s bodies are not designed for prolonged periods of over excitement!

Difficulty calming over excited dog down

Exercise that over-arouses your dog is ok in moderation but allowing it to happen every day is likely to do more harm than good. Dogs that have difficulty in calming down or controlling themselves often become reactive and hypervigilant. For example, playing fetch every day with a ball or frisbee obsessed dog may well result in over-arousal. Rather reduce this type of exercise and replace it with some other forms of physical and mental stimulation like searching for an article that you dropped while out walking with your dog.

Use the high arousal games and exercise less frequently or for special occasions instead of a daily routine. This will allow a longer calming down period between bouts of over-arousal which will prevent the activity (i.e. over arousal/excitement) from becoming a normal behaviour for your dog.

By Gordon, Trainer at DogtownSA